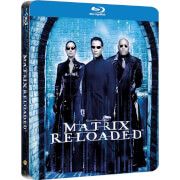 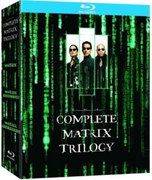 The Matrix Trilogy is now available in a definitive three disc Blu-Ray set. Featuring all three films together for the first time in stunning High-Definition, with a newly re-mastered picture and sound for 'The Matrix'. This box set also includes the companion piece 'The Matrix Revisited', two new audio commentaries on each film, 'Enter the Matrix' video game footage, deep-delving featurettes/documentaries, and much more! The Matrix The Everyday World is Real. Reality: That World is a hoax, an elaborate deception spun by all-powerful machines of artificial intelligence that control us. Mind blowing stunts. Techno-slamming visuals. Megakick action. Keanu Reeves and Laurence Fishburne lead the fight to free humankind in The Matrix, the cyber thriller that you will watch again and again. Written and Directed by the Wachowski brothers (Bound), the story sears, the special effects stake out new movie-making territory - the movie leaves you breathless. The Matrix Reloaded Neo and the leaders of the human resistance discover that Sentinels are burrowing their way towards Zion. Estimating they have perhaps just 72 hours until an all-out assault, Neo must return back into the Matrix and find the keymaker to gain access to the mainframe to ensure human survival... The Matrix Revolutions In this final explosive third installment of the Matrix trilogy, the city of Zion, last bastion of the human race, defends itself against the massive invasion of the machines as Neo attempts to fulfill his prophecy as 'The One'. As the Machine Army wages devastation on Zion, its citizens mount an aggressive defense - but can they stave off the relentless swarm of Sentinels long enough for Neo, adrift in a no man's land between the Matrix and the Machine world, to harness the full extent of his powers and end the war? 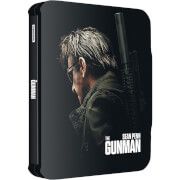 Zavvi Exclusive Steelbook - Limited to 1000 copies. A gripping action-thriller from the director of Taken and the producer of The Matrix and Non-Stop, The Gunman stars Oscar-winner Sean Penn as a former military operative dragged into a deadly cat and mouse game. With Penn in his first action role, and a top-notch cast including Javier Bardem and Idris Elba, The Gunman is a high-octane must-see.

Castronova, Jeri: Symbols of the Grid